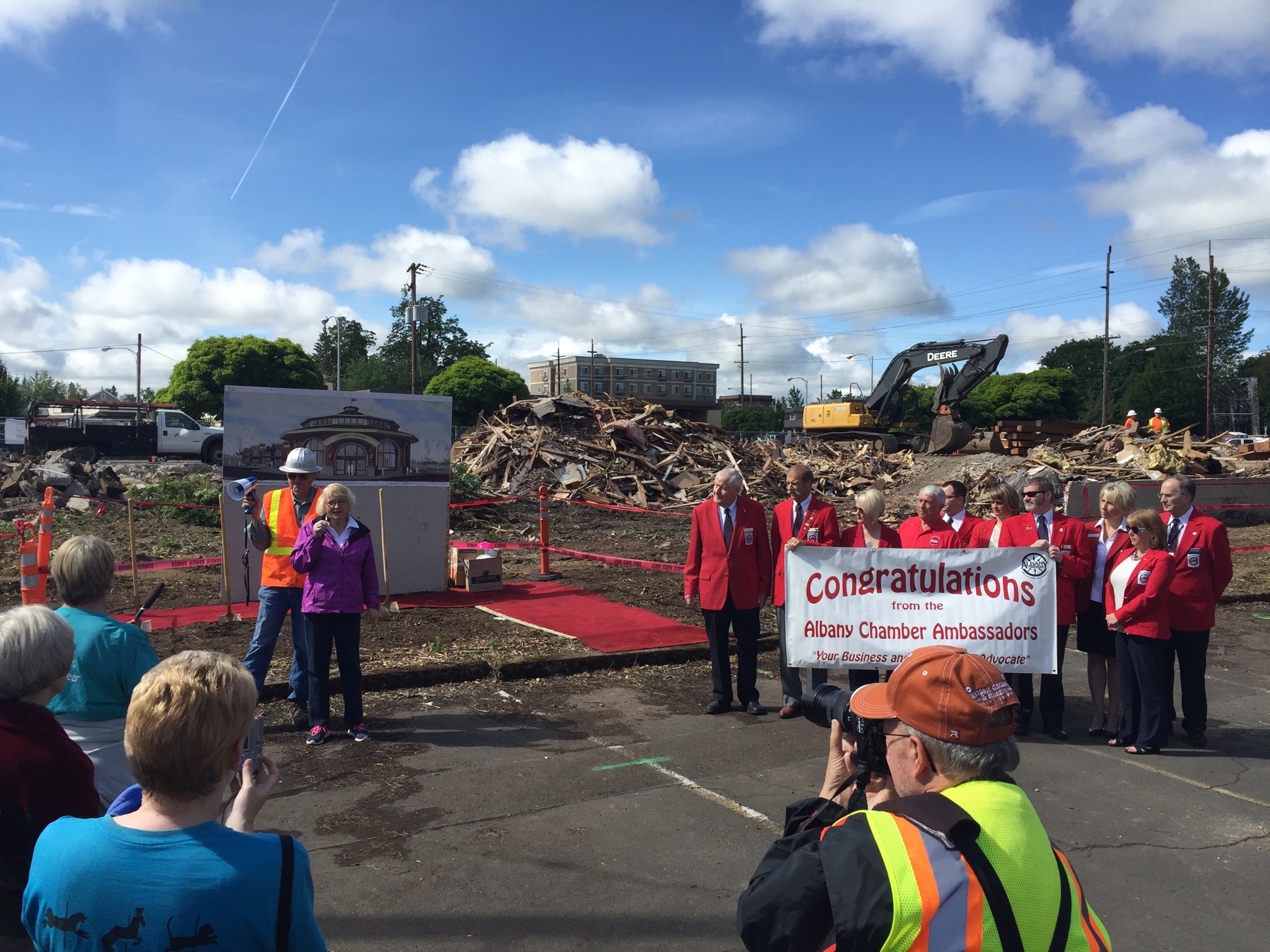 Mayor Sharon Konopa said she’d never seen so many people at a ceremonial groundbreaking, but the turnout was understandable.

After all, the Historic Carousel & Museum is seen by many officials and other residents as a project that will rejuvenate downtown, draw thousands of visitors and boost business in the area.

A groundbreaking for the carousel’s new $5.6 million building at 503 First Ave. W. was held on Tuesday morning, and about 150 people were in attendance.

“This is one more step in this wonderful journey. … So many people jumped on the bandwagon with us,” said Wendy Kirbey, who came up with the idea of the local carousel to draw visitors after seeing Missoula, Montana’s carousel in 2002.

Konopa said the project shows that Albany is a caring, supportive community.

“This is exciting for Albany. I am so grateful for all the dedicated volunteers who are making this dream come alive,” she said.

Dr. Gary Goby, a volunteer who is helping the museum board oversee construction, said that more than 180,000 volunteer hours have been given to the project.

The carousel board hopes the new 22,000-square-foot building is completed by June 1, 2017. The centerpiece of the building will be a 60-foot dodecagon structure with 12 sides.

The first floor will be 14,000 square feet and the 8,000-square-foot basement will include a workshop, storage area and volunteer break room.

And, of course, the carousel will have 50 hand-carved horses, other animals and mythical creatures to ride, as well as two chariots.

Goby said that, overall, the structure will dwarf Salem’s nearby 12,000-square-foot carousel. The space also will be available to rent for weddings, fundraisers and other events.

The carousel attracted 2,000 to 2,500 visitors a month to see wood-carving and check out progress on the project before its building was demolished.

“I can’t see it doing anything but growing from there,” said Jimmie Lucht, executive director of the Albany Visitors Association, in an interview after the event.

Konopa also told the crowd there was plenty of skepticism when Kirbey first presented her grand plans to the Albany City Council.

“We just thought, ‘What is she talking about?’” she said.

“There were bumps along the way, and some people didn’t think the carousel project would ever get finished,” Konopa added.

The city has contributed about $750,000 in urban renewal funding for the project, which helped the carousel board buy the 1942 building and property on First Avenue.

The old structure was demolished earlier this month, and a backhoe and rubble from the old building remained on the construction site on Tuesday.

Goby said that three semi-truck loads of timber from the former building, including large beams, will be repurposed into the new structure.

Until the new building’s completion, the carousel animals are on display at various locations around downtown, including at Two Rivers Market, 250 Broadalbin St. S.W., where woodcarving and other work on the animals also is continuing.

Albany resident Alicia Bublitz brought her two children to the groundbreaking, and said that she and her family sometimes visited the carousel twice a week. “We take all the relatives who come visit. It’s a really exiting part of living downtown,” she said.

Her five-year-old son Ronan Rau was excited, as well. “Yeah. Fun,” he exclaimed. His favorite carousel animal? “I like the elephant,” he said.

“I’m so glad it’s going to be done when they’re old enough to have birthday parties there,” Bublitz said.

Carousel volunteer and board member Mary Morgan remembered when Albany was known for the Timber Carnival. She thinks the carousel could become what people think of when they think of Albany.

“That’s what we hope and dream,” she said.

Tags:
AlbanyCarouselfamily
Last updated on May 14, 2019